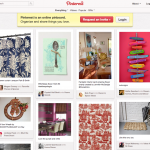 Pinterest is one of the fastest-growing social networks in 2012. According to ComScore: in January 2012, 13.76m people worldwide visited the site and spent an average of 89 minutes there. Business Insider recently shared some interesting data tidbits about its growth, users, and their sharing behavior. But, I really like the data shared in this Guardian article on 2-28-12. Obviously, Facebook continues to dominate this space with over 845M monthly active users (source) who spend a whopping average of 6 hours and 33 minutes on the social network each month. But, when you exclude the Facebook giant, a clear set of up-and-coming players emerge in Pinterest and Tumblr. I talked a bit about Tumblr’s growth last year in this post. 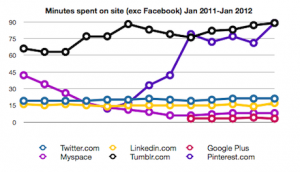 This VentureBeat article provided a compelling infographic, including Facebook, that captures the essence of what is happening in this Social Media space (Original source: Statista). While Twitter, Linkedin, and Google+ may have more unique users per month, the real story is in engagement (i.e., time spent on the sites). It’s great to have more eyeballs, but only if they are actually coming back to your site frequently and using it a lot. And that is why you should be keeping a close eye on Tumblr and Pinterest. 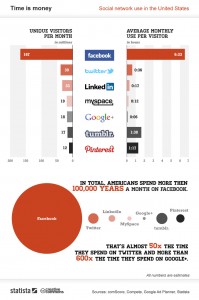 Social Network Use in the U.S. Source: Statista

But, is Pinterest the right place to speak to your potential customers? Are they even using Pinterest? For example, the users on Pinterest are mostly female (87%) and ages 25-54 (80%). So, if you’re trying to reach a teen male audience with your product message, for example, it may not be the best place for you to invest your time. Pinterest is also an inherently visual experience. When you “pin” things to your “boards” (i.e., to share them), you are pinning an image. The image can be selected from all of the images that Pinterest finds at a specified URL address or you can upload images from your computer. That pin then links back to the site it came from. So, this is different than other social media sites that allow you to just share text, or a link, or a snippet of an article. If that is what you want to share, then you might be better off doing that on Twitter, Tumblr, or your Facebook page.

Of course, your own social media strategy probably includes sharing content and updates across most or all of the typical social channels. But, some businesses seem to lend themselves very well to the Pinterest experience vs. others. They have a strong visual component to their products and services, like Etsy. Or, they have great charts and meaningful infographics that convey their business messages, like the Wall Street Journal. Other organizations seem to be stretching to play the “visual game” and it feels forced. Yale University’s board is just sad.

Yes, it is hard to ignore the big sites that have a lot of users and, by all means, you should be using Facebook, Twitter, and Linkedin for your business. But, ignore Pinterest and Tumblr at your own peril. Many sites are already finding that Pinterest is driving more referral traffic than Google+, Linkedin, and MySpace combined. Also, the engagement is remarkably different. In my own experiments, I’m discovering that users on Pinterest and Tumblr are repinning and reblogging (i.e., resharing) my posts at a much higher level than I’ve ever experienced on Facebook and Twitter, even though I have many more followers on those sites. Plus, they are actively commenting and asking follow-up questions too. Isn’t that what you’ve always wanted from your audience?

I leave you with this useful infographic from MDG Advertising, as a quick guide to Pinterest and how you should use it.