I had the good fortune during my career to participate in leadership coaching for the first time when I was a VP at Yahoo. I had certainly heard about career coaching over the years but had never really considered trying it. My experience with companies in Silicon Valley has been that the majority used to take a “sink or swim” approach to management and leadership. You either were a “natural” and got it or you struggled and failed (often becoming the worst nightmare of your employees).

Luckily, most companies are increasingly offering some management and leadership training through their HR departments. This is certainly better than nothing, but generalized corporate workshops rarely help you become your best and you don’t really get the long-term mentoring that you need to help you resolve and learn from the conflict that you will personally encounter as a leader.

Sometimes, though, you are lucky enough to have had a great manager who took you under his or her wing, gave you honest feedback and guidance, and helped coach you as you took those first steps down the path of managing and leading a team. But, unfortunately, those types of managers and leaders are still fairly rare.

According to a recent OfficeTeam Survey, almost 1/2 of the employees surveyed said that they have worked for unreasonable managers and 1 in 4 just decided to suffer through it.

A more recent and diverse survey conducted by Fierce, Inc. was a bit more positive.

Contrary to much of the recent hype around bad bosses, over 70 percent of respondents claimed to have a good working relationship with their supervisor. Even more encouraging is that 62 percent of those surveyed report that their job satisfaction is “high” or “extremely high,” and 53 percent report that their boss’s management style has a direct and positive impact on their relationships with coworkers, fostering collaboration and encouraging candid communication.

While these results are good news for businesses looking to retain and engage their workforce, the survey also revealed the central characteristics of good bosses, which include:

– Eighty percent of respondents who reported a good employee-supervisor relationship claim that the most important thing a boss can do to create a positive working relationship is to both solicit and value their input.
– Among respondents who claimed to have a poor relationship with their boss, 42 percent stated that one of the top reasons the relationship was strained was due to their boss’ failure to listen or take their input into account.
– Of the managers surveyed, less than 25 percent identified soliciting input as an area in which they wanted to improve.
– Thirty-seven percent of those who reported a good relationship felt that it was also important for a manager to offer constructive feedback.
– Over 40 percent of those who felt they had a bad supervisor identified a lack of candor on the part of their boss as critical to the downfall of the relationship.

Whether you have a good boss or a bad boss, there is something uniquely valuable about a personal career and leadership coach. Even with a good boss, there will always be issues that you won’t feel comfortable discussing with your direct manager. A good coach has your best interest and goals in mind and they maintain the confidentiality of your discussions.

If this sounds a little similar to a therapist, it’s not surprising. A great session with a great coach can indeed feel a little like a career therapy session. I always learned a lot during my sessions and I’m glad that I was lucky enough to experience this type of personal coaching. I highly recommend that you explore it for yourself and your own team.

Some of the key benefits:

HP stock pops 7% on a rumor that the CEO, Leo Apotheker, is getting fired 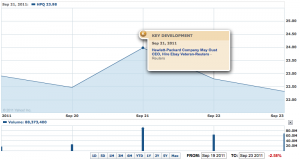 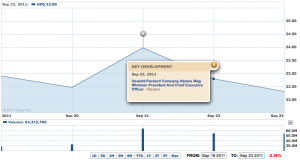 Here are two excellent organizations that I worked with while I was at Yahoo. They provided group workshops and 1-on-1 leadership coaching for me, my peers, and several members of my own management team. Well worth the investment!

Feeling stuck in a rut at work? Struggling to find a great mentor? Can’t find a trusted advisor? I work closely with you in confidential one-on-one meetings to create your personal leadership breakthrough.

Axialent offers a number of services for business leaders, including 1-on-1 coaching. I participated in this while I was at Yahoo and my coach, Sharon Ting, was fantastic.

Mariposa Leadership also offers 1-on-1 leadership coaching. I was lucky enough to have the CEO, Sue Bethanis, as my coach and learned a lot during my meetings with her. They also offer group workshops.