Research has found that it is normal for us to think of work in one of three primary work orientations: job, career, or calling. Given my decades of experience across a vast range of industries and multicolor-collar jobs, I’ve seen that most people get their life satisfaction outside of work. For them, a job is just a job, a way to pay the bills, and that’s ok.

However, there are a number of people who do tend to think of managing their “career” and are actively interested in developing it, which has been much more of the norm in my Silicon Valley Tech experience. But, there are very few people who actually end up pursuing what could be referred to as a “calling.”

As much as we tend to pursue wealth in our careers (at least in mainstream American culture), and think that it will make us happy, the reality is that most of us really just want financial security. Research has shown that increasing your income may affect self-report of life satisfaction, but it actually does not improve emotional well-being beyond a certain point. That point being roughly $75–100K USD.

So, chasing wealth certainly won’t result in fulfillment or even happiness. As you can see below, wealth falls below financial security, marriage, having an impact at work, having children, and a prestigious career. 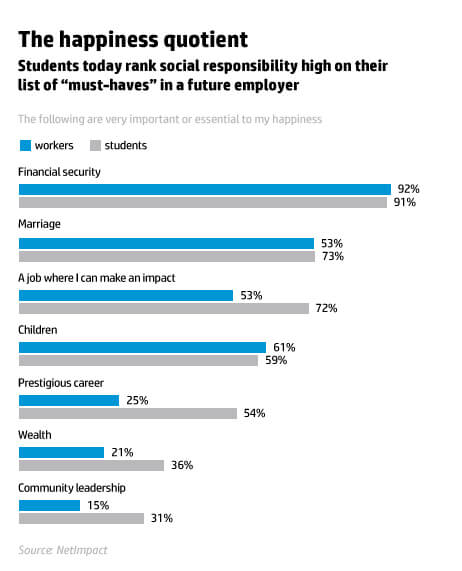 Shared from “What makes us happy at work?” and survey by NetImpact

But, having financial security and making an impact in your job obviously do factor highly in this “happiness quotient,” which is clearly related to some measure of success in your career. So, what’s the best approach to achieving this success? Find a great job and double down on working your way to the top in that company, or jump ship to new opportunities whenever they arise?

Move up, move on, or move out

I may be biased. I have spent time in more traditional jobs (e.g., security guard, police dispatcher, fast food, retail), but I’ve mostly worked in the Tech industry and the days of retiring with a big ol’ software company have faded slowly away. I have no illusions about job security with a traditional 9–5 corporate job.

I was at IBM when the first layoffs happened in the history of the company. People who thought they had a job for life fainted in the hallway when they found out that they had to pack a box and leave immediately. I was at Apple when colleagues and friends had to pack up and leave a job they loved under the watchful eyes of security guards. I conducted multiple rounds of layoffs as an executive at Yahoo. Not an enjoyable experience for anyone involved.

People will talk about the instability of consulting or being an entrepreneur. But, a traditional j-o-b is sometimes less stable. I first went independent after dealing with such instability early in my career. So, you need to realize that the clock is always ticking when you’re in a job. What is your plan to move up, move on, or move out?

There are a few exceptions where you may be able to do the same job day in and day out for your entire working life and retire. The job pays the bills, and your drive and passion exist outside the walls of that company. But, if you are ambitious in your career, or your company has expectations for continuous growth in your role, you need to understand how to move up.

This is usually the most obvious career path

Total compensation includes much more than just your base salary, potential bonuses, stock options, and medical. The benefits you receive from a job should also include opportunities for career development and growth. As long as you are truly learning and growing in your job, then continue to invest in your role and career within that company.

I often tell people that their corporate job is really a postgraduate education. This is where you really learn how to do what you do, develop your skills, leverage your talent, gain knowledge and experience, and create a powerful network. As long as you are actively moving up, regularly receiving raises and promotions, and your career is clearly developing, then you are in the right place. But, if your career stalls, opportunities dry up, and you no longer see a clear path ahead, then it’s time to find a way to move on.

By the way, if you are enjoying this article, please share it to help someone else find it. Thanks in advance!

When I talking about “moving on,” I don’t mean moving on from the company. I am referring to moving on from your specific role to a new role that will continue supporting your growth within the company. This can be challenging in a small company, but opportunities are more plentiful in larger corporations and you should take advantage of them if you have stalled in your current role.
Sometimes there is no longer a path up. You get promoted up and up until you hit a ceiling where you need to move into leadership to advance, but there are no management/leadership roles available for you to move into within your current organization.

You may need to find a creative path

You could be patient and wait (and wait) for a role to open up or a re-org to shift things into an alignment to give you that opportunity. It depends on where you are in your career and how long you want to wait. But, I know that life is short, and it’s even shorter when you consider your best years for advancing your career quickly.

People will publicly state that there is no such thing as age discrimination, but in the Tech industry the whispers in the hallways tell a different tale. You’d better move up quickly in your career before you hit the doldrums of your late 40s. My Silicon Valley peer group often says, “If you aren’t C-level before 50, it ain’t gonna happen.”

If you are ambitious, then you need to actively seek opportunities to continue your upward mobility within the company as soon as possible. Network internally, be vigilant for pending organizational changes, and actively pitch yourself for stretch roles. This often means that you will need to change organizations, move into new product areas, and even completely redefine your role. For example, I know a number of Design leaders (myself included) who had to move out of Design and into Product Management to continue their upward movement. There are easily 100x more CPO roles than CXO roles.

Be prepared to move on to a new role, a new division, move to a new city, or even move to an office location in a different country. Sometimes that is exactly what it takes, if you want to move up and stay within the same company. Plus, moving into a senior leadership role is often easier when you take over a new team. Being promoted from the ranks has its own set of challenges. But, eventually…

This is what most people mean by “job hopping.” No one really gives the side eye to movement between roles within a company. That’s not unexpected if someone wants to continue their promotion path. But, there has been debate about frequency of job hopping. How much is too much? How soon is too soon?

I have referred to job hopping before as the “Silicon Valley Promotion.” I will recommend it to people who seem to have stagnated in their career advancement with their current employer and they can’t even move around within the company. A reasonable duration of employment has changed over the past 2 decades. People used to retire in a job (old IBM), then they would be in a job for 10–20 years (I saw this at Apple), then it was more like 5–7 years (my time at eBay and Yahoo), and now I see people in jobs for 2–4 years and no one blinks an eye. It is a red flag if someone doesn’t seem to stay in any job longer than a year. But, you shouldn’t feel shackled to a job if it is no longer fully meeting your career needs.

Sometimes you have to embark on a new journey

I discovered this very early in my career during a performance review when my manager said; “You’re doing great work and I would love to promote you again and give you a raise. Unfortunately, times are tough and the company won’t allow it”. A few weeks later, another company reached out to me and I took the interview (when normally I wouldn’t have). I accepted the job and ended up with a big “promotion” and a huge raise.

Obviously, you can’t keep hopping from job to job to job every year. You need to do great work, contribute meaningfully to your employer, and stick around for awhile. Also, the industry is pretty small and you really can’t outrun bad performance by continually job hopping. Your movement should be associated with upward career mobility.

In the end, you have to do what is right for you and your career. But, more often than not, you will find that smart moves to the right companies at the right times will advance your career more quickly than being blindly loyal to your current employer and hoping that you will be recognized.

I like to refer to the path that leads to your ultimate career goal as a series of stepping stone jobs. These days, it is rare that one job and one employer will take you all the way to the end and retirement (who is going to truly retire anyway?). You will need to map out a series of moves between roles and companies that will inevitably get you where you want to be. Note that the path isn’t always logically “up.”

Be smart with your choice of companies and roles. Don’t just chase the money or title. Sometimes the role and the things you will learn at a given company are worth more than a higher salary at another. Play the long game, and consider how you want your career to evolve and where you ideally want to end up. You may occasionally need to move sideways in order to find a new upward path.

So, does job hopping guarantee a successful career? Obviously, there are no guarantees in life. But, your chances for success increase dramatically when you take ownership of your own career and create a strategic plan that includes intentional moves to a new company and/or role when necessary, vs. staying in a stalled role out of some sense of loyalty or fear of change. Be strategic. Be intentional. Hop when it will truly benefit you and your career.

Note: this article was inspired by my original answer about job hopping on Quora.

Want to become more intentional with your own Career path?

Get on the waitlist for my upcoming “Bulletproof Your Career” Course.