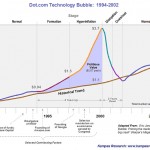 I lived through the infamous Dot-com Bubble. I was at a startup in 1998, that went through the usual ups and downs and up again. Then I founded a design consultancy (for some stability, believe it or not) and advised a number of small and medium-sized startups in Silicon Valley for several years (before eventually joining eBay). Some had solid products with real business models and went on to IPOs or acquisitions (e.g., Uppercase was acquired by Microsoft in 2000). But, a few were remarkably resistant to my efforts to help them think through their business model (I won’t name names). They didn’t seem very concerned about revenue at all, which I found quite surprising (almost as surprised as they felt when their design consultant was pushing them to discuss a revenue model). Lo and behold, those startups did not survive and some collapsed so quickly that I sometimes was left standing in front of their empty building with an unpaid invoice in hand. I certainly learned a number of valuable lessons during those bubble years. I would hope that everyone in the Tech industry these days has learned from the sins of their tech startup fathers, but apparently that isn’t always the case (as evidenced at this year’s LAUNCH Festival).

The majority of serious investors who experienced the first bubble also learned their lesson. The advice they now provide to founders does include detailed discussions around sustainable revenue models, such as subscriptions and transactions instead of traditional advertising revenue. I do think that a lot of entrepreneurs have learned from the mistakes of their predecessors. Over the past few years, I have talked with many founders and witnessed smart thinking around product strategy, business strategy, and exploring early revenue models beyond that old model of “We’ll have a lot of users and sell ads.” But, I have also witnessed a unfortunate number of startups with a fun or “clever” concept that apparently haven’t spent any time thinking through their business model. A perfect example was highlighted today in an article on Business Insider that described the failed pitch by Zabbi. As bad as the pitch sounded, the website is even worse. There is nothing on that landing page that would compel me to try that app. In a world of app overload, you had better be crystal clear on your differentiation and value proposition.

Dave McClure of 500 Startups cut to the chase with his usual acerbic insight:

“I’m not convinced you have a real product. I didn’t get what the fuck you are doing at all. How many people in the room believe this shit? Playing ‘Don’t Worry Be Happy’ isn’t going to show me your business model.”

So, startup founders, I hope you’re paying attention and taking notes. I know that many of you weren’t around for the first bubble, but that doesn’t mean that you can’t learn from it. You can certainly learn from the cornucopia of advice that so many angel investors, tech analysts, and other startup founders are sharing so freely these days. Hiten Shah, co-founder of KISSmetrics, has many useful posts on conversion and revenue on their blog, for example. Read, ask, discuss, learn. I am also more than happy to talk with you about your product strategy, your business model, and how surprisingly subtle design changes can make all the difference in your conversion flows and revenue. Just reach out to me.

Don’t ever walk onto a stage or into a pitch meeting without a clear and concise explanation of how your wonderful startup is going to wow and acquire new customers AND make money from them.