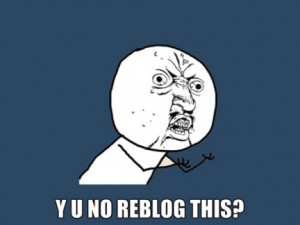 I was just reading the Nielsen Social Media Report: Q3 2011 and, while there are some findings that are not that surprising, there are some very interesting tidbits of data. Not surprising to see that social networks, blogs, and microblogs are dominating our time spent online, taking up nearly 1/4 of time spent on the internet in the U.S. But, did you know that Tumblr is #3 for time spent? It ranks behind #1 Facebook and #2 Blogger, but ahead of Twitter and Linkedin. Tumblr has also nearly tripled its unique U.S. audience in the last year. It had about 15 million unique visitors last month and users spend 623 million minutes per month on the site.

Over the years, I have experimented with dozens of platforms for blogging, microblogging, and social networks. I have long been a WordPress user for my own blogs. I have also used Facebook, Twitter, Google+, YouTube, Delicious, Stumbleupon, and Digg as distribution channels and connecting with followers. But, I had not used Tumblr until a few months ago. The experience has been enlightening and helps me understand the site’s popularity and growth. The engagement with my followers on Tumblr has been very different than Facebook and Twitter. The frequency of likes and comments is much greater on Tumblr. Posts are reblogged more often than the same content is retweeted on Twitter or shared on Facebook.

The ease of reblogging content on Tumblr has certainly been a huge part of its popularity and growth, but this is also creating one of Tumblr’s biggest issues: Copyright infringement. As I scroll through my Tumblr stream, it is clear that a large majority of the content is “borrowed” and modified. I can’t imagine that Tumblr won’t need to crack down on this at some point, just as YouTube did (which helps protect them from lawsuits). Some believe that Tumblr will only have serious success with large brands and advertisers once it deals with this issue plus its “porn issue“. Regardless, the increases in time spent and users that Tumblr has been enjoying makes it a player that everyone needs to keep an eye on.

Highlights of Nielsen’s “State of the Media: The Social Media Report”